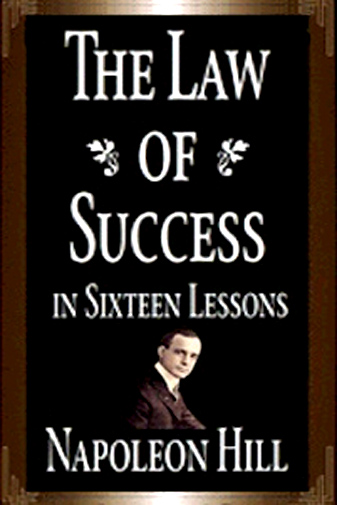 Napoleon Hill was born into poverty in 1883 in a one-room cabin on the Pound River in Wise County, Virginia.  When he was 13 he began his career as a “mountain reporter” for small town newspapers and went on to become one of America’s most beloved motivation authors.  He dedicated more than 25 years of his life to define the reasons why so many people fail to achive true financial success and happiness in their life.

His big break came in 1908 when Robert L Taylor former Governor of Tennessee and owner of Bob Taylor’s Magazine employed Hill to write “success stories” about famous men.  Hill’s first assignment was to interview one of the richest men in the world, the steel magnate Andrew Carnegie.

During the interview Carnegie asked Hill if he wante the opportunity to organise the World’s firs philosophy of individual achievement based upon the principles of success that he and other self-made millionaires had used to accumulate their vast fortunes.  Carnegie explained that the task would require years of work and that he would only pay Hill’s expenses because he wanted to make suare Hill would learn the philosophy and prove it worked through his own success and financial achievements.

Hill accepted the task, so Carnegie commissioned Hill to interview over 500 millionaires, and with Carnegie’s help, Hill formulated a philosophy of success (The Law of Success), which was a success formula for the average person.

“The Law of Success in 16 Lessons was Hill’s first book set.  It was originally published in 1925 as a multi-volume study course, and it was re-released in 1928 in an abridged version under the title “The Law of Success”.  The Law of Success later evolved into Napoleon Hill’s personal success teachings that were called “The Philisophy of Achievement”, and he considered freedom, capitalism, democracy, and harmony to be important elements in this philosophy.

Napoleon Hill passed away in November 1970 after a long and successful career writing, teaching and lecturing about the principles of success.  His work stands as a monument to individual achievement and is the cornerstone of modern motivation.  Perhaps no other “success” book has influence more people than Napoleon Hill’s 1937 classic “Think and Grow Rich” which is an outstanding follow-up to The Law of Success.

You can download ” The Law of Success in 16 lessons” here.  Each lesson is a separate download link :-

Lesson 4  The Habit of Saving

Lesson 9 Habit of Doing More Than Paid For

One Response to Laws of Success