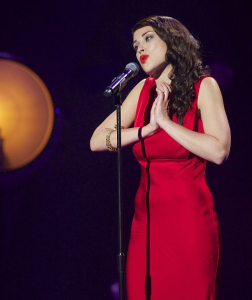 When you have belief in yourself then magic happens …..

Just a few days ago we were watching Britain’s Got Talent and heard again the incredible voice of Alice Fredenham singing “Cry Me A River” in the semi-finals.

This beautiful and talented woman lost her belief in herself and her talent when she was rejected by a talent show called The Voice.

When you hear her sing you know that with the magic of belief she will become an incredible recording star.

‘I was having massive bouts of self doubt,’ Alice said ahead of semi-final performance on Tuesday

The Magic Of Belief – Alice Fredenham Singing “Cry Me A River”

As we watch her nervously wait from the response from the judges it was clear that despite all her self doubts that the magic of belief could be restored.  Here’s what the judges said:

‘You are every inch the star. You drew us into the emotion of the song.’ David Walliams

‘You’re voice is so seductive and beautiful. It was majestical and hypnotising,’ Alesha Dixon

‘There are so many celebrities and not many stars. You are a star.‘ Amanda Holden

Simon Cowell  ‘I said you had a voice of liquid gold, well I’m going to change it to liquid platinum.’

We were totally blown away by her amazing gift and her talent and know that when she has the magic of belief in herself then nothing will stop her.

Everyone has something special inside of them – it’s a gift.

When you take action and follow your dreams it is possible to create magic but we know that sometimes you need a little help.  That’s why we created The Mindset Shift to show you just what is possible when you have that belief in yourself.

Let us know what you thought about the amazing Alice Fredenham – we think she is destined to stardom regardless of whether she wins the competition or not.

What about you?  Are you destined for stardom with your talent?

This entry was posted in News, Personal Development and tagged Alice Fredenham, belief, Britain's Got Talent, The Mindset Shift. Bookmark the permalink.