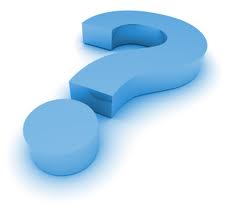 It’s how we deal with things that make a difference to our success in life and in our business.

Take last night as an example ….. we run a weekly webshow – ChrisAndSusan.TV where we have guest experts join us to share their experiences and knowledge and help people with different aspects of building their online business.

As you can imagine this take a bit of organising and on the day in particular, we have to hook up with our guest expert to run through the software we use and make sure that everything is ok.

Last night we had as our special guest the legendary Chris Farrell all the way from Beverley Hills joining us.

We hooked up on skype late afternoon and went through everything, had a nice chat – he really is one of the nicest people you could hope to meet – and got everything set up.  Chris then went ahead and did a ‘shout out’ on Facebook. 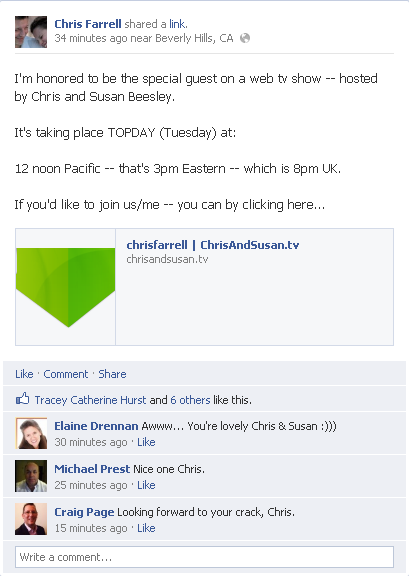 At 7.55 pm (we go Live at 8.00 pm) we checked on skype to see if he was ready and found he was status “offline“.   Never mind we thought, he’ll be with us shortly – something must have delayed him because we know he wouldn’t let us down.

It’s now just gone 8.00 pm but we have to get started as our “audience” are waiting for us – they’re very keen and always on time!  As we are chatting and welcoming new viewers we hear skype ping (we kept it on just in case) and it is Chris’ VA – Tricia – this is when we got an inkling that something was up.   She told us that there had been an accident just outside his house and he wouldn’t be able to make the show

So what could we do ……. well, as they say, “the show must go on” so we asked the audience what they would like to do – stay with us and we would do an inpromptu training or re-schedule the show.  We’re pleased to say that the unanimous decision was to keep going and have the training.

Meanwhile Chris being the true gent that he is managed to get down to his local Coffee Bean, and connected up to the internet and skype messaged us.  We looked at getting him on live from there but it was just not going to be possible with all the noise.  He even got a message out on Facebook. 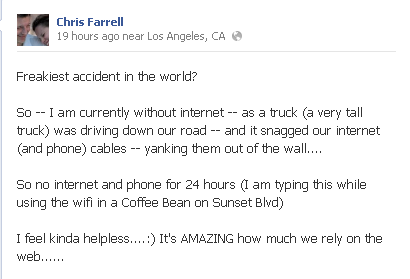 The thing is, he could have just left not bothered to try and that’s the point here.  He came across a problem but he found a way round it.

We had a problem with what to do on the webshow but we found a way round it.

Now not all problems we come across when we are building an online business are easy to solve but there is always a way if you look hard enough and ask the right people.

We’re pleased to say that the show did go on, we had fantastic support from everyone on the show and even included an inpromptu co-host with David Downer who ‘volunteered’ to share his story of getting started online which went down a storm.  He’s making the most out of being a ‘stand in’ for Chris Farrell …… better watch out Chris!

Let us know how you have solved a problem in your online business.

PS  In the words of Winston Churchill “Never, never, never give up“